In Defense of Writers

In Defense of Writers
By K.D. Carlson

A lot of ink has been spilled on descriptions of writers as sensitive, tortured souls, who struggle to live in the “real world.” And there is a grain of truth in the stereotype. But in my personal experience, the day-in and day-out writers I have the privilege to know are also some of the toughest, most tenacious people I’ve ever met. And I have a few theories why.

1.     Writers face unbelievable odds against their success.
Writing is a lonely sport, with a high bar to clear before even the most amazing literary athletes can achieve something approaching career success. Only the hardy, or the fool-hearty (or both), would ever pursue writing as more than a hobby — especially if they’ve read the statistics. Check out the piece below from the Huff Post, noting that only 2% of writers are able to sell over 5,000 copies of a published work (never mind how hard it is to get published in the first place).  Any self-respecting carpenter would turn to another trade if  faced with a 2% chance of achieving a level of success that could sustain life. The writers I know persist. Pens. Of. Steel.
(http://www.huffingtonpost.com/william-dietrich/the-writers-odds-of-succe_b_2806611.html).

2.     Even successful writers live in a precarious state of fluctuating income that almost always requires keeping a day job.
Recently, I had a conversation with an attorney friend who represents dramatists at the height of their careers.  My friend was having lunch with a playwright who has won a Tony, an Obie, a Drama Desk Award and a Pulitzer Prize for Drama, the highest accolades offered in the theatre. But during the lunch in question, the accomplished playwright looked up at my attorney friend (and the executive director of a big-ticket theatre who had joined them) and said: “You know, I’m the only one at this table who can’t make a living in the theatre.” That’s right. The Pulitzer Prize winner is keeping his day job — as almost all playwrights, novelists, short-story writers, memoirists, biographers, and poets (especially poets) must. Most writers work at least two jobs (their vocation and their “pay the bills” occupation). Talk about stamina.

3.     Writers are at high risk for depression and anxiety.
According to a Guardian article, artists and writers are more riddled with depression and anxiety than the general population  (https://www.theguardian.com/books/2010/dec/13/writers-depression-top-10-risk). Psychologists are still sorting out whether or not people with the proclivity to write also have a tendency toward mental illness, but one thing they do know is that living from freelance gig to freelance gig, or foregoing sleep to write after or before a day job doesn’t help. And the health hazards only increase when you add in the time that writers spend alone in the twisting, and potentially dangerous, alleys of imagination.

4.     Only the most exceptionally successful writers are recognized for their achievements.
To illustrate this point, please indulge me by contemplating a couple of hypothetical scenarios.

• You’ve completed law school, passed the bar, earned the praise of peers and faculty. You enter your chosen field to discover that most of the available work must be completed on “spec”— meaning you only get paid only if the firm “hiring” you likes your work. Or, in pursuit of a little better security, you plug into a series of freelance legal gigs, which offer no 401K, no salary, and no benefits. Or, maybe you get really lucky and land one of the few paying jobs in your wheelhouse. However, you’re not really an attorney. You’re someone who does research for attorneys, or writes briefs for attorneys, or advertises the services of attorneys. And, in order to earn this coveted salary, you need to put your “real attorney” dreams on the shelf.

• You’re a physician. You’ve completed your coursework and residency, honed your skills working long hours. But, because only the top one or two percent of doctors actually land paid positions at hospitals and clinics, you have to earn your stripes by serving patients for free while you enter contests (some of which charge a fee), submit your best surgeries for committee reviews, and bang on the doors of successful doctors for references.

Perhaps I digress, but a lot of writers are faced with just this sort of scenario in pursuit of their craft. No, you don’t have to go to med school or law school to write a book or poem (although many writers take out significant loans to earn MFAs). But it does take a certain level of skill, preparation, and hard work to do it well.
And here’s where things get tricky.  Even so-so lawyers and meh doctors can make a living doing what they do — and can even earn the odd pat on the back for it. Think about it: even the worst surgeon or the most inept lawyer occasionally gets a fruit basket from a grateful patient or happy client.

5.     Writers face rejection, or complete invisibility, on a regular basis.
Yes, I know there are jobs far more demoralizing than writing for a living. Inseminating corn on a farm crew, working as a janitor at a spit-wad infested grade school, or dressing up as the furry "Advo-Cat" newspaper mascot all come to mind (partly because they're all jobs I've held).
My point is: who wouldn’t be a little discouraged when much of the feedback from months or years of work sounds like this: I don’t like your voice, This piece isn’t for us, I wanted to love this, but I didn’t. We love your writing, but we don’t think we can sell it. Mostly, writers hear critiques or crickets. It’s tough for them to wake up every morning with the full realization that this art they study diligently, practice daily, believe in fiercely and pursue passionately may be just that — a pursuit, with no achievable goal in sight.
.
So why do writers pound their heads against such a formidable wall?
Here’s the $10 million dollar question. And the answer is probably a little different for every writer. Personally, I’m driven to create stories that explore how we are all connected, how our most absurd quirks can be our most endearing traits, how the most particular details of our individual lives can draw us together. In short, I write because I love our broken world, and the broken humans who share it.
Just to be clear, I know I have a choice in this matter, as most writers do. No one came and pounded on my door, saying, “You must be a writer. We need you!” But sometimes it feels like a calling, one that I both take seriously and find absurd. I mean, who in their right mind sits in a room making up stories and poems and plays every day? And who has the chutzpah to think that anyone else would ever want to read or see these solitary creations?
A ragtag band of rough and ready writers, that’s who. I, for one, will be forever grateful to Michael Ondaatje, Joseph Konrad, Mary Oliver, Anne Lamott, Kate Atkinson, Tana French, Michael Hollinger, Julie Jensen, Doug Wright, Billy Collins, Ruth Ozeki, and the droves of writers who have helped me see hope in the midst of despair, connection in the face of division, and stillness in the blur of chaos. Thank you ALL for pursuing your calling against the odds.

How can we stand together in defense of writers?
If you’ve read this far into my diatribe, you may be wondering how you might defend the writers you love (including yourself). I don’t have a magic wand to end the suffering, but I do have a suggestion for helping lift the psychic load of a writing life. If you know someone who writes, and you want them to keep writing, instead of ditching this ridiculous pursuit for a respectable career, think about sending an occasional “fruit basket.” It’s amazing what a word of encouragement, or a coffee punch card, can do.
And if you’re a writer who feels called to participate in this crazy, solitary sport, please keep the faith — in the muses and their Divine source, in the wonder of the ordinary, in the daily practice, in your fellow writers, and in the deep belief that words have power to change lives, including our own. 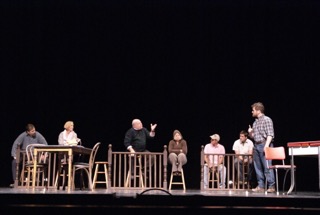